The President of the United Republic of Tanzania, His Excellency Samia Suluhu Hassan

By Our Correspondent, Dar es Salaam
It is a standard budget that is going to soften and reduce the cost of living for all citizens. This is due to a number of elements identified by the government through the Sector Ministries and included by the Ministry of Finance and Planning, under its Minister Mr. Mwigulu Nchemba.

Tanzania has set up a mechanism to discuss and analyze in Parliament to create a better budget for the future of their countries. For a nation like Tanzania, a self-reliant and aspiring country for economic growth, it is committed to designing, managing and approving a budget that provides relief to its citizens and enhances work for economic growth, employment, and income.

Under the President of the United Republic of Tanzania, His Excellency Samia Suluhu Hassan, Tanzanians are going to find solutions to their problems through key issues that have touched them.

Some of the elements in the 2022/2023 budget are the productive sectors of Agriculture, Livestock, Fisheries, Energy, Investment and Trade affecting and relying on the majority of Tanzanians.

Significantly, these sectors were discussed in detail by lawmakers. Best of all, the responsive government under its commander Mr. Samia, much of what has been discussed in this House, has been taken up and implemented for the benefit of all Tanzanians.

The government ensures that domestic and foreign loans that contribute to the growth of the national debt which is still sustainable go to development projects directly to reduce the cost of living. Even its repayment is not difficult because it is a normal cycle within the state.

In any case, the debt is a sign of the existence of efforts to bring development to the Nation because the money goes to the construction of strategic projects such as roads, bridges, power projects, railways etc.

The budget shows it is going to reduce the cost of living and stimulate the economy, employment, agriculture, livestock, fisheries, energy, investment and trade. The government has decided to focus on it with the aim of resolving the challenges that have contributed significantly to the deterioration of the national economy.

In terms of infrastructure and social services such as education, health, water and the upliftment of poor households through the TASAF households development fund it is also one of the most productive factors considered to be the source of accelerating the revitalization and strengthening of the productive sector. for improving the lives of Tanzanians.

The government has decided to take on the burden of subsidizing strategic services such as edible oil, wheat, fertilizers and petroleum. An important factor like this tends to generate inflation and increase the cost of living for citizens.

On several occasions the country has experienced a shortage of edible oil. It has also happened that fuel prices have doubled enough to increase fares on transport vehicles. Through the 2022/2023 budget which the government has allocated Sh 100 Billion per month as a way to reduce inflation in Tanzania.

Now farmers of cashews, sorghum, maize, tea and all in this country, will work to produce their produce without the same challenges as usual.

In this regard, the government through its Ministry of Finance is committed to reducing the cost of living in tandem with accelerating economic growth. Priority sectors affecting a large number of people such as agriculture, livestock, fisheries, industry and trade have been worked on and solutions have been largely addressed.

Concluding his budget in parliament in Dodoma, Minister Nchemba said it was their hope that the country would move forward by resolving many grievances and putting in place effective mechanisms to ensure that citizens experience recovery in their lives in one way or another.

“The government aims to create more than three million young men and women in the agricultural sector by 2025. This will be done by increasing the irrigated area to 8,500,000 hectares, equivalent to 50% of the total area cultivated in the country by 2030,” said Minister Nchemba.

It has also increased the improvement of social services such as health, education, water, infrastructure without forgetting the emphasis placed on the project to serve poor households under the TASAF fund.

What the government has done is to intensify its fundraising efforts as well as expand its budget as much as possible. For example, the government allocated a budget of 34.88 Trillion Shillings for the year 2020/2021.

This indicates that the government has invested heavily in the collection of its revenue from domestic sources. And from the loans available, they will go directly to the construction of infrastructure, classrooms, health centers to reduce if not completely eliminate the deterioration of health care for Tanzanians.

Projects will help open up the economy and increase the income of a country with a small percentage paying off debt while huge profits go to the people due to the pace of development.

The government does not borrow for recurrent expenditure, but to use such loans to build development projects. In the argument of some people that the government has a plan to reinstate the head tax is a distortion and a lack of understanding.

What is being done is the improvement and efficiency of domestic revenue collection so that the country can run itself using its own domestic resources.

Revenue cannot increase if effective strategy is not put in place to identify and educate those who are eligible in the whole issue of tax payment. The government does not do business. Its job is to create a tax-friendly environment.

What has been done is to visualize the taxpayer registration process and not to have a head tax plan as some of them try to mislead. 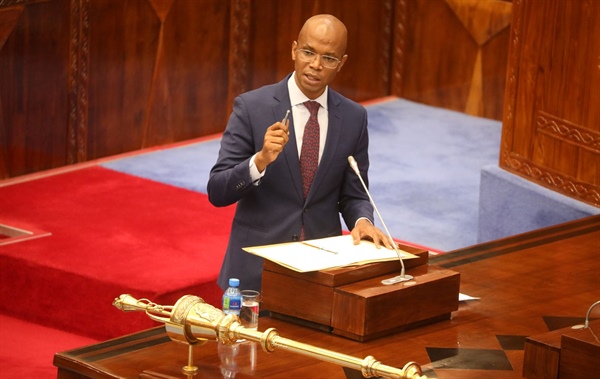 Taxes will be collected based on income from those identified by the type of business they do. Those with high incomes will also be taxed according to existing laws. If this is done in full, it will speed up tax collection.

Government work will help to strengthen the use of ICT systems in making tax estimates for small business owners who are unable to keep records and compile accounts for their businesses.

By looking at that, you will find that the government answers all questions due to the existence of a good and participatory budget for ministry officials and MPs who are the representatives of their citizens.
Tanzanians.

BEST ANSWER TO THE TOP 5 MOST COMMON INTERVIEW QUESTION